David Muir began his newscast on Aug. 18 by saying: “Tonight, breaking news from Rio coming in right now. (Breaking news, coming in right now? False.) Muir, anchor of ABC’s “World News Tonight,” continued: “Police now (now?) recommending that two American swimmers, including Ryan Lochte, indicted….Tonight, right here—the new (new?) surveillance video of them at that gas station, what really happened.” “Tonight, right here”? Makes me think of a sideshow barker. Muir went on, “And standing firm this evening, sources who’ve talked to the swimmers tell ABC News that they were, in fact, held up by armed gunmen.” “Armed gunman” is a redundancy. If a man is armed and a bad guy, he is, of course, a gunman. So there’s no need to describe a gunman as armed. Rather, there’s a need not to say that.

Seven hours before Muir went on the air at 6:30 p.m. ET, “Inside Edition” reported—at 11:36 a.m. ET—”Brazilian police have recommended American swimmers Ryan Lochte and Jimmy Feigen be indicted on charges of falsely reporting a crime, according to ABC News.” Hmm. “LawNewz” said, “ABC initially reported that the swimmers had been indicted, but they have since backed off that claim, saying that police have recommended charges.”

At 12:27 p.m. ET, Heavy.com, a digital media company, posted the video. That was six hours before Muir introduced the video as “new.” Maybe Muir meant that it was new to him? “Also breaking,” Muir said, “the wildfire out of control now racing tonight across land at 30 miles an hour.” Funny how so many stories break during Muir’s half-hour broadcast, yet not breaking on CBS’s or NBC’s 6:30 p.m. newscasts.

Next, Muir said: “The major headline coming in from Chicago. The head of police says seven police officers should be fired….” A graphic said, “Breaking news.” Not so. In fact, The Associated Press moved that story, about 880 words, at 11:05 a.m. ET. The AP tweeted: “Breaking from @AP: Chicago’s police superintendent says he will recommend that seven officers be fired in the killing of Laquan McDonald.”

A little later in the newscast, Muir said, “Next, this evening, the major headline from Chicago tonight. The police superintendent there….” And shortly after that, Muir said, “And tonight, a major blow against what many see as the department’s code of silence….” Major. Twice. And once earlier—a major effort to make a big story bigger.

Then Muir intro’d a reporter, who began, “Tonight, those seven Chicago officers facing firing,” followed by four more ings in that sentence. That prompted Don Hill to quip, “It don’t mean a thing if it ain’t got that ing.”

Andy Fisher poked fun at another ABC anchor: “Tom Llamas, who anchors ABC’s Sunday evening newscast, said in a mid-show tease for a robbery story on ‘World News Tonight’ on Sept. 11, when Llamas said, “You won’t believe what happened next….” Andy said wryly, “I know it was meant to get me to keep watching, but if I wouldn’t believe it, why should I watch it?”

ABC wasn’t the only network with a problem or two: CBS News’ “Sunday Morning” on Aug. 28 had its own problem when the program profiled a prominent singer and provided artwork. But the art didn’t work. See for yourself: 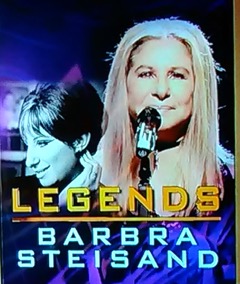 Now for what you might call an ate crime, observed by the formidable Fisher. He told me that on Aug. 23, WCBS-TV’s noon newscast reported a burglary and car theft at the Indonesian consulate in Manhattan. Andy said, “A reporter interviewed the consul-general, but he was misidentified in the narration and in the lower-third as the ‘consulate-general.'” A consulate is an institution or a building; the person holding the office is the consul—not to be confused with consigliere.

A widespread problem: confusing lie and lay. On Sept. 12, an NPR anchor began a newscast, “Hillary Clinton laid low….” A few minutes later, I began reading the Washington Post, and I ran across this, “He mostly laid low on the news that Hillary Clinton has been diagnosed with pneumonia….” Where are any editors? Do they still exist? Have they all been dismissed or deported, or what? They can’t all be lying low.

A bit of advice to writers, this from an Australian TV news producer, Rohan Bridge, “You’re writing news, not literature. The fewer words, in fact, the fewer syllables you use, the easier it is for viewers to take in the information you have gathered. Save the prolix prose for your novel. Keep in mind that most viewers aren’t paying full attention to our broadcast. They’re tired, distracted, making dinner, or just plain drunk.” Ed Bliss, the editor of the “CBS Evening News with Walter Cronkite,” used to say, “Remember, they’re only half-listening.”

I hope you’re not half-reading.